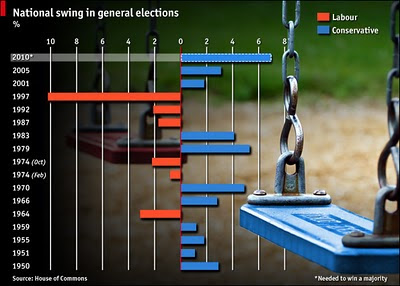 Utopian Realism wrote: Apr 7th 2010 9:23 GMT .ExDub wrote (Apr 6th): For non-British readers it would be useful to explain what "swing" is. I'm assuming it's the difference between the Conservative and Labour percentage popular vote; am I right?

So, the swing is NOT equal to the difference between the Conservative and the Labour percentage of the total votes. This graph is rather spotting trends, voter movements.

Interesting material - but not so clearly explained.